2017 is going to be an exciting year. This is the year that NADA — the National Automobile Dealers Association — turns 100 years old. We are looking forward to being in New Orleans later this month for NADA’s annual conference and learning more about what’s in store for the automotive industry this year. In the meantime, we wanted to reflect on NADA’s past 100 years and accomplishments.

The NADA as we know it today got its start in 1917, when a group of 30 dealers went before Congress to oppose a luxury tax on cars. They argued — successfully — that cars were a necessity for the American way of life, and should not be considered a luxury item. That group shaped not only the future of the association that would carry the torch on issues near and dear to our industry’s heart, but it also shaped, in a real way, the society that we enjoy today.

Think about it — because of NADA’s intervention, we have our amazing and vibrant industry today that includes more than 16,500 franchised dealerships across the nation, selling more than 17 million vehicles in 2016 alone. The automotive industry employs more than a million people, paying out $60+ billion in wages annually. Our industry is one of the driving forces of the economy today, and NADA has helped to shape it.

While there is nothing to say we wouldn’t have gotten here eventually, it probably wouldn’t have happened as quickly or as completely as it has, thanks to NADA.

Other things NADA has done for this industry: Its Used Car Guide has been published since 1933, giving consumers and dealers alike a better idea of the value they can expect for their vehicles. It has become one of the de facto standards still in use today for ensuring a fair trade value is set for used vehicles sold in the United States. In the 1940s, NADA organized and recruited automotive mechanics, sending “NADA Battalions” to help the Army in World War II. Over the years, the association has produced countless studies and research that have helped keep the industry moving in the right direction, and produced radio, television and print campaigns to help dealers promote the value of the services they provide.

For a fascinating look back into the past, check out NADA’s Visual History timeline, with some amazing old photos!

NADA’s 100th Anniversary Convention kicks off on January 26 in New Orleans. It’s going to start with a bang, the NADA 100 Carnival, to be held at Mardi Gras World from 7 – 10 p.m. on the 26th, featuring cuisine and entertainment from some of the best New Orleans has to offer. From there, the convention will offer a wide range of educational sessions, keynote speakers, events and exhibits that, as always, will leave every attendee feeling excited about this vibrant industry, and ready to tackle whatever the next 12 months might have in store for us.

We are announcing two exciting initiatives during this momentous occasion, so stay tuned in to our blog and other social media platforms for more details. We can’t wait to see you there! 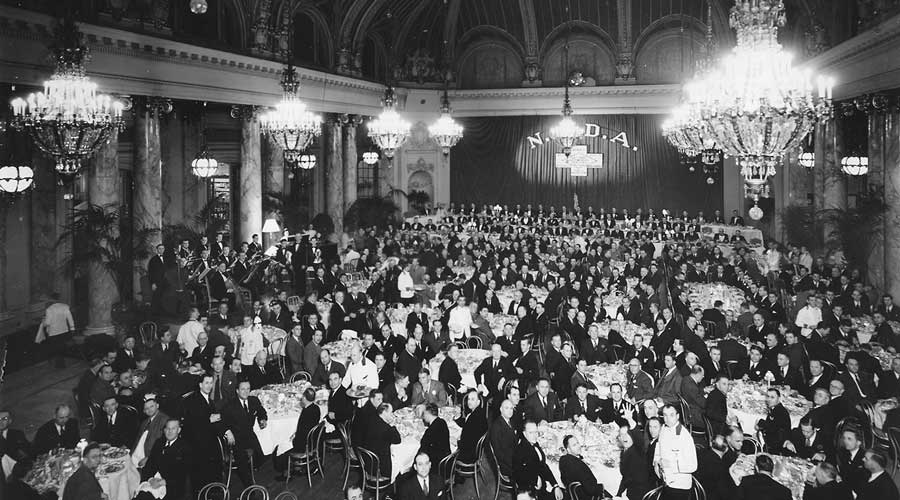 The NADA Convention in San Francisco back in 1939 when all attendees could fit in one ballroom!

Here you can create the content that will be used within the module.